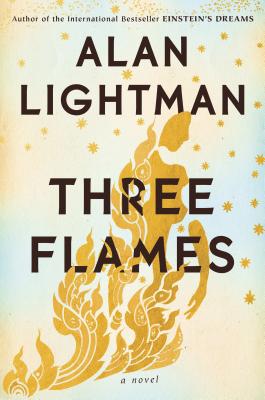 Join us for an evening with

to read from and sign copies of his new novel,

Reading at 6:00 p.m. at the Jay Etkin Gallery at 942 So Cooper St (2 doors down from Burke's Book Store) with a signing to follow at Burke's.

The stories of one Cambodian family are intricately braided together in Alan Lightman's first work of fiction in seven years.

Three Flames portrays the struggles of a Cambodian farming family against the extreme patriarchal attitudes of their society and a cruel and dictatorial father, set in a rural community that is slowly being exposed to the modern world and its values. Ryna is a mother fighting against memories of her father's death at the hands of the Khmer Rouge and her powerful desire for revenge. Daughter Nita is married off at sixteen to a wandering husband, while her sister Thida is sent to the city to work in the factories to settle their father's gambling debt. Kamal, the only son, dreams of marrying the most beautiful girl in the village and escaping the life of a farmer. Yet it will be up to Sreypov, the youngest, to bravely challenge her father and strive for a better future.

Three Flames is a vivid story of one family's yearning for freedom and of a young girl's courage to face down tradition.

"Lyrical and poignant, Three Flames weaves the stories of three generations of a poor, Cambodian farming family as they struggle to survive and hold on to their humanity . . . Beautifully written and told with great compassion, Alan Lightman's novel gives readers a family that is rich in stories, history, and heart, proving in the end that love shines even in the midst of great darkness." --Loung Ung, author of First They Killed My Father

Memphis native ALAN LIGHTMAN--who worked for many years as a theoretical physicist--is the author of six novels, including the international bestseller Einstein's Dreams, as well as The Diagnosis, a finalist for the National Book Award. He is also the author of a memoir, three collections of essays, and several books on science. His work has appeared in The Atlantic, Granta, Harper's Magazine, The New Yorker, The New York Review of Books, Salon, Nature, and Nautilus, among other publications. He has taught at Harvard and at MIT, where he was the first person to receive a dual faculty appointment in science and the humanities. In 2003, Lightman founded the Harpswell Foundation, a nonprofit organization whose mission is to empower a new generation of women leaders in Cambodia and Southeast Asia. He lives in the Boston area.