Burke's Book Store, which has survived the depression and two World Wars, was begun in 1875 as a family business and stayed that way for 3 generations. Walter Burke Sr. gave birth to Burke's Book Store at 180 N. Main Street shortly after the Civil War, selling books, newspapers, slates, tin toys. Walter Burke Jr. (born above the book store) took ownership in 1911, adding public and parochial textbooks to the inventory in1946. William Burke followed in his father's footsteps, taking ownership in 1958 and began selling used and antiquarian books.

In the sixties, during that great urban purge known as Urban Renewal, Burke's moved eastward to 634 Poplar, in among the pawnshops, and the original Main St. building and surrounding neighborhood was razed.

In1978, after the death of Bill Burke, Burke's Book Store was sold to Diana Crump. She, in turn, sold it to Harriette Beeson in 1984. Harriette moved the store in 1988 to its third location at 1719 Poplar, at which point new books were added to the Burke's shelves. 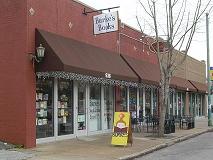 In 2000, husband and wife, Corey and Cheryl Mesler, who met in the store, and after working there for over a decade, bought Burke's. In 2007, the Meslers made the decision to sell the property at 1719 Poplar and move the store to its fourth (and hopefully final!) location in the hip and vibrant Cooper-Young neighborhood.

The store has expanded and changed over the years, and now encompasses "the best of the old, the latest of the new, and hard to find collectibles." In the last two years since the move, Burke's has expanded its used book selection to become one of the best in the city (Memphis Flyer's Best Used Book Store, 10 years running), and most recently stepping into the online bookselling arena to offer our wares to the world.

Today, muddling toward the future, the Meslers keep the old flame burning, still cognizant of their role in the community, re-energizing the store's once semi-active publishing arm, still remembering the signed W. C. Handy autobiography, the book bound in skin, the first edition Uncle Tom's Cabin. It's a heady business, a calling, a place of sympathetic magic. 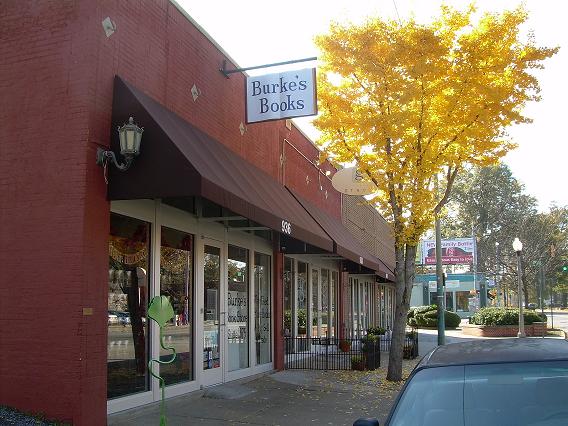 Located in the heart of the Cooper-Young neighborhood, in midtown Memphis, Burke's Book Store is one of the oldest independent book stores in the country. Since 1875, Burke's has provided Memphis with the finest selection of new, used, and rare books.

We stock used titles in a variety of subjects (see "Browse Categories" at lower left), as well as first editions, signed copies, and rare books. We currently have approximately 14,000 of our used and rare items listed here on our site for you to browse or search. Titles are added on a daily basis, so browse often. Please see Terms of Sale for online ordering information. If you wish to be notified automatically via e-mail of new arrivals in your areas of interest, please enter your e-mail address in the Topic Notification space provided at the left and select subjects from the menu.

We also stock new titles in our store, with particular concentration on newly published fiction and nonfiction, paperback classics, fiction and literature, Memphis writers and history, and southern literature. We will feature some of our new titles (see list at upper left) here. If you are looking for a particular new title, please give us a call or visit our store.

If we do not have a particular title that you need, we can special order new titles from our distributor at no extra charge. Typical arrival time for special orders is 2 to 3 days.